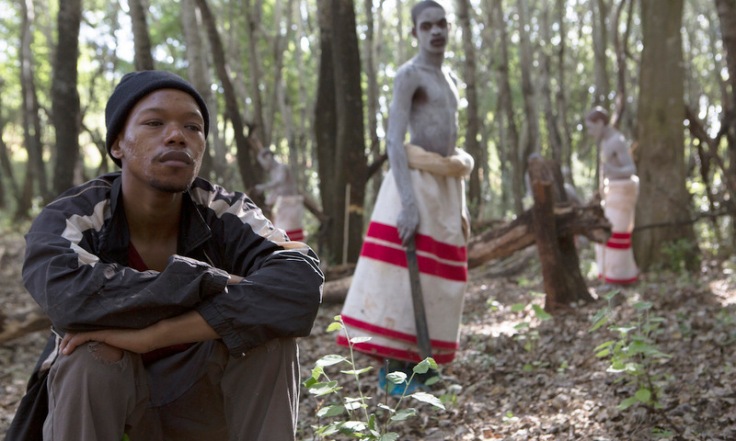 The debut film by John Tengrove touches on topics of forbidden love, rejection and rebellion. All of those have been quite well-researched by the cinema for many years. Fortunately, the director avoids easy narrative solutions, and by embedding the story in exotic realities, he intensifies the viewer’s experience. The Wound is a real pressure cooker with a whole range of emotions tucked in under a sealed lid.

The story takes place in South Africa, where the ritual called Ukwaluka is still practised. Teenage black boys from the Khosa community are becoming men, circumcised by the elders. This rite of passage has been kept secret for years, described only briefly in Nelson Mandela’s autobiography. It’s controversial because of the unsuitable treatments used by the elders, far from today’s medical standards. (By the way, a few years ago several young people died just because of the infection they got during the initiation and subsequent rituals). The main character, Xolani (Nakhane Touré), is a thirty-year-old man who works in Johannesburg, but once a year he returns to his home rural village to help next generations to undergo a ritual circumcision. Boys, interested more in life pleasures then old-folks tales, often take part in it only because of the pressure of their parents. Smeared with white paint, dressed in traditional robes, they will have to undergo a weekly fast and a series of tests recommended by the elders. Xolani, at the request of one of the fathers, will look after only one novice – Kwanda (Niza Jay Ncoyini). For a wealthy teenager from a big city, soaked in a Western culture, the whole initiation is an unnecessary superstition. Scorned and rejected by the rest of the group, Kwanda has one ally only – his mentor. However, Xolani’s return home is not only driven by the need to help his young tribesmen. This is an excuse to meet Vija (Bongile Mantsai), a childhood friend, but also a lover. Two men hide their forbidden relationship from others very well, but the observant Kwanda begins to suspect something.

The story gradually unfolds in front of our eyes, building complicated relationships between the characters who avoid any words and declarations like fire. Is Vija, the epitome of masculinity, a popular and well-liked guy, really happy as a husband and father of three daughters? What „behaviours and meetings with some boys” Kwanda’s father meant when he complained about his son? Does Xolani return to the mountains to find more than casual sex? In these understatements lies the power of The Wound, and any kind of speech or attempt to steer our feelings (mainly from Kwanda) seem fake. Fortunately, actors show sincerity, commitment and a full range of emotions expressed in small gestures and glances. The camera changes the perspective from extreme, intimate close-ups, to almost panoramic shots of figures immersed in the wild nature. We are never too far from the action, we feel like being part of it at all times. Fortunately,  the DOP avoids literality, both in the uncomfortable to watch scene of the circumcision, and in the intimate takes between the main characters.

The Wound picks up a discussion about the traditional vision of masculinity in a contemporary, diversified world. Examining the boundaries between tradition and modernity, the director does not judge nor he gives his opinion but allows us to observe and draw conclusions. We see that tradition can be a destructive force, but it is also an important joint, a distinguishing feature of this tribe. Kwanda expresses the views of progress, questions the rules of the ritual, exposing himself to harassment. His role as a rebel is revised several times, it is also an inflammation point for further tensions and nervousness between mentors. The boy also becomes an apple of discord between Vija and Xolani. The young man begins to play with something very powerful, but he’s not fully aware of it. It’s the force of culture, a rite passed down through generations, that stigmatises all perversions, leaving a tougher mark than the wound caused by a blunt knife. In this community, it is a force more powerful than love, freedom and friendship.

John Tengrove’s film fits in with the topics raised by earlier by films like Brokeback Mountain or God’s Own Country. The Wound is raw and unpredictable, deeply moving, emotional and sometimes disturbing but precise in its observations. A debut to be truly celebrated.

A Peccadillo Pictures release premiered in cinemas across the UK on the April 27th.