There is only one way for this movie to carry you away and surprise you completely. Avoid any trailers, descriptions, abstracts and – yes – reviews! Therefore, please, either come back here after the screening or read on at your own risk. I promise, there will be no spoilers. And take my word for it – your abstinence will be rewarded a hundred times.

John Krasinski is remembered as an actor from the American series The Office, where he played alongside Steve Carell, and from participation in several medium-calibre full-length films (either financially mediocre, such as Away We Go or 13 Hours, or artistically doubtful – Something Borrowed, Aloha). A Quiet Place is not his directorial debut, but who watched The Hollars or Brief Interviews With Hideous Men? Exactly, neither did I. However, his latest production will stay in viewers’ memory for a long time. This is a film that Krasinski directed, he co-wrote the screenplay and acted as of the main characters. Fortunately, being a one-man band came out a hundred times better than when Tommy Wiseau tried it and we are not delighted with the yet another The Room. Quite the opposite.

A Quiet Place is based on a brilliant idea. We observe events in the near future, where making any sound equals death. After the opening sequence everything will be clear: why the protagonists gently walk barefoot on the ground, the paths are spilt with sand, and verbal communication has been replaced by sign language. Having a deaf daughter in the family (Wonderstruck star and real mute Millicent Simmonds), with whom they had to communicate before the cataclysm occurred, puts them in a superior position: they already have the ability to speak without words. The initial shocking scene explains a lot, and authors are gradually adding more and more information about what happened over a year ago in the world of the Abbott family. Because the use of words is close to none, the director uses images to explain the situation. These are so simple treatments, so wonderfully obvious, reminding us that cinema is after all audio-visual art, in which the lack of one is compensated by the other. Shots of newspaper headlines, notes on a whiteboard, combined with exchanges of gazes and behaviours tell us everything. We don’t need any intros explaining what and how, irritating voice-overs, internal monologues. Authors put their confidence and trust in the viewers’ intelligence – and it’s a deeply rewarding experience.

Krasinski perfectly uses camera and sound, showing, on one hand, the everyday life of the characters, on the other, danger lurking not that far away.We already know from the TV show The Walking Dead that in case of the end of civilisation is best to hide in the middle of nowhere. Here, nature is equally important, because, in the end, it provides food, it serves as a shelter, but it also is threatening. Maize fields are once again (Signs) treated as a spectacular and important element of the story. It is amazing to watch everyday activities like washing, cooking, family board games, learning, in which characters had to adopt the principle of „zero noise”. Equally fascinating is to learn what the tactics are in the event of an attack. And small details, like a protruding nail, cause heart palpitations amongst the viewers. The recurring motif in the film comes when the sound is turned off completely, applying the audio perspective of one of the characters. The director uses this tactic rarely, but when he decides to do it – the effect is overwhelming. Watching A Quiet Place we finally realise how noisy creatures we are with all our civilisation and its artefacts.

I mentioned earlier about the brilliant premise of the movie, which reminds me a bit of the recent horror Don’t Breathe and a classic thriller with Audrey Hepburn Wait Until Dark. As in any production that relies heavily on one concept, it’s easy to find some holes in logic. What sound is too loud and how did the characters find out about it? Was it not necessary to create noise in order to create the conditions in which they live now? What were the thoughts of the pair of main characters, married couple Evelyn and Lee (Emily Blunt and Krasinski) to make a crucial decision about their family? At some point a water leak occurs and why the omniscient master of the house doesn’t hear it? Where does the electricity come from? The continuous display of the whiteboard with meaningful notes in the last phase of the movie gets a bit irritating. We know the conclusion is near! In this part of the film, there is also a bit too much of „antagonist” on the screen, and a few narrative decisions are somehow doubtful. Those questions rise rather after the screening and they cannot, thankfully, completely spoil one thing: the enormous satisfaction and engagement when you’re watching this film. 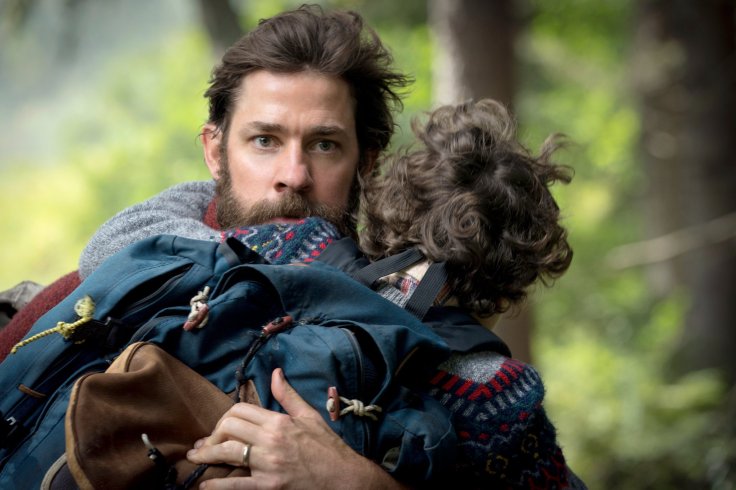 A Quiet Place is a very successful film, that balances between genres, drawing on family dramas, post-apocalyptic thrillers, horror movies and ambitious action movies. Krasinski perfectly builds the tension like the early M. Night Shyamalan and combines them skilfully with the elements of an action feature ala Michael Bay (who is a film producer!). The movie doesn’t lose its intimate climate for a moment and what is the most important in the cinema: emotions and empathy we feel for the family. The director allows us to be a scared child, terrified husband, determined mother, misunderstood family member. He throws us into the small world of the Abbott family, who is impossible to dislike and not sympathise with. And at every moment he makes us feel uncertain about the fate of the characters being watched. For such a dose of adrenaline, the creators deserve great applause. Of course, very quietly.

One more thing you will only understand while watching A Quiet Place. The paranoia about not making any sound spreads into the audience – at least to most of them. It’s an amazing achievement that only makes this film more incredible. So please, don’t buy any popcorn, sweets in wrappers, eat before the film starts. Turn of your phones. You don’t want to be heard!